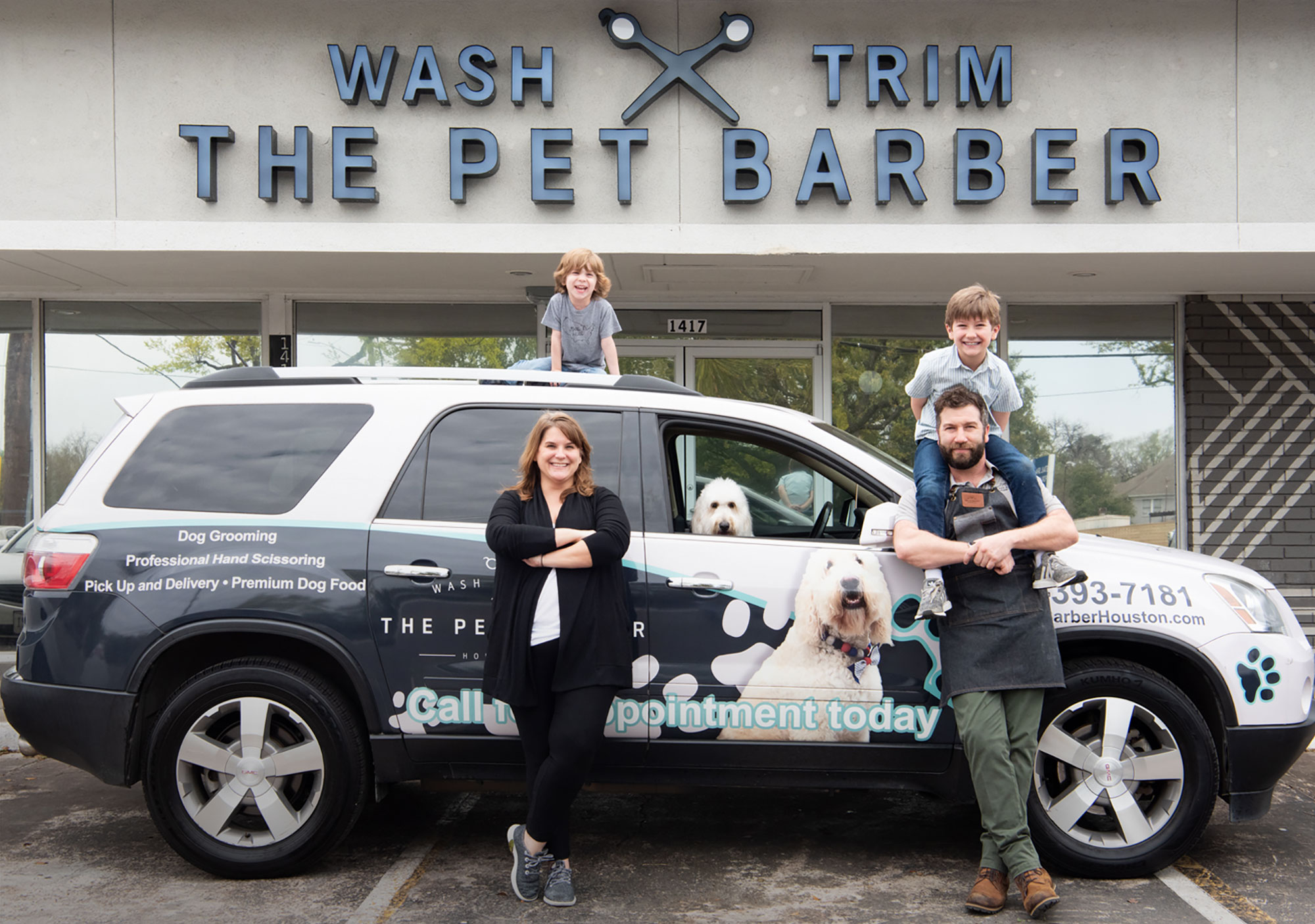 PAUL WILLIS BEGAN his grooming career at the age of 17. He bathed dogs in a salon, working his way up and attending The New York School of Dog Grooming.

After graduating at the top of his class, Willis moved into show grooming, and later facility design on a corporate level. That last role inspired him to take a different approach within his profession.

“I was sick to my stomach of everything being about the bottom line,” he says.

Pet health — both physical and mental — comes first at The Pet Barber in Houston, TX. Willis and his wife, Kristen Cover, own and operate two shops in the city, with their second opening in the Montrose neighborhood in 2018 and earning a 2019 PETS+ America’s Coolest Stores Honorable Mention. 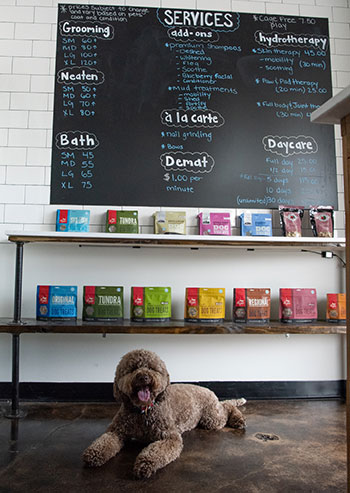 Paul Willis enjoys building fixtures himself, including this pipe and wood shelving featuring food and treats.

Once a Pet Barber groomer assesses a dog and communicates with the client about any issues, the pup enters one of the salon’s Master Equipment PolyPro tubs its Ariel hydrotherapy tub. Water remains a constant 89 degrees in winter and 81 degrees in summer, thanks to direct-heating and digital controls.

“We bathe them in the optimal temperature,” Willis explains. “There’s no uncomfortable warming up or cooling down.”

“It gets the bath salts and shampoo into hair follicles and loosens dead skin, bad oil and mites. There’s also a UV light that kills all bacteria,” he says of the hydrotherapy tub, which was made for people, but Willis saw the potential for pets.

When it comes time to cut, groomers use scissors instead of clippers from start to finish.

“It takes longer, but the outcome is amazing,” Cover says. “We also offer hand stripping, which can be difficult to find.”

When their dogs are not being groomed, pet parents can choose between kenneling and cage-free daycare. Most opt for the latter as the couple has created a relaxing and fun atmosphere with soft music music and voices, and fresh air.

Pets can lounge on couches or at a groomer’s feet, or play in a 500-square-foot room with rubber flooring that leads to a covered 10-by-35-foot turf yard.

“They’re happy here,” Willis says. “Our clients tell us that as soon as they get in the vicinity, their dogs know exactly where they are going and perk up. Then they can’t wait to get through the door.”

Cage-free daycare costs only $7.50 per appointment.

“We don’t want cost to be an issue,” Cover explains. “We have daycare, and we want their grooming experience to include it.”

It has become so popular that the couple offers it at standalone pricing, as well, for $15 half and $25 full days, plus in packages.

The Pet Barber also stands apart from corporate competitors — and from other independent shops — with its decidedly masculine aesthetic. While Willis and Cover hired professionals to assist with structural, plumbing, electrical and HVAC changes to the run-down former laundromat, they handled all interior design.

The result: stained concrete floors in a dark bronze, a mix of white painted and tiled walls, and wood-and-pipe fixtures, the latter of which Willis built himself. Groomers wear dark denim aprons with leather patches featuring the shop’s stylishly simple logo.

The couple isn’t afraid to stray from expected marketing methods either. Cover manages efforts, embracing email and Facebook to engage with current and/or potential clients, but she also uses door-to-door marketing as an effective form of advertising.

“We create door hangers in a very nice paper, almost a linen texture, that looks expensive and reflects our brand,” she describes, adding that while they outsource some drops, the most effective campaigns have Willis doing the hanging himself.

“I get to engage with people,” he says, on everything from services to products, all of which contribute to good pet health. Willis adds that in 2020, they plan to repeat the practice in the neighborhood’s many upscale high-rise residential buildings. 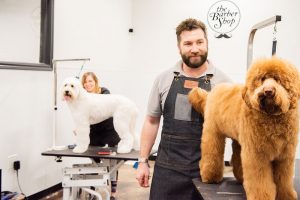 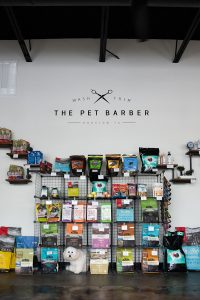 1. BUCKLE UP: Heavy Houston traffic poses a challenge to clients, so The Pet Barber offers pickup and drop-off service in its GMC Acadia SLT. It ranges from $25 to $40 depending on distance, and each dog rides safely in a caged-off bucket seat with a safety harness.

2. QUALITY FIRST: The shop sells a limited number of products — and only those Willis and Cover use themselves and recommend. “If they work well for our pets, I want to sell them,” he says. They mark them up modestly. “I’d rather sell a product and make 25 percent, one that I believe in that actually does good, than sell something just to make a 150 percent profit.” Among their most popular are Show Season’s Soothe Shampoo and SOOS Dead Sea grooming products, and Orjen and Fromm food and treats.

3. bathtime: Willis took a test bath in the hydrotherapy tub himself. “That way, I can speak to the client from personal experience about what it does and how it feels,” he says.

5. FAMILY BUSINESS: Willis and Cover’s kids, 5-year-old Teddy and 9-year-old Jack, can often be found at the shop. They love to greet customers and, of course, play with the dogs. They also appear in Facebook Live videos. “This really connects our family to our client family,” Cover says.