Omaha sisters use color and creativity to earn reputation as the place for natural and organic foods.

WALK INTO THE GREEN SPOT in Omaha, NE, and be immediately wowed. Light shines through floor-to-almost-ceiling windows, reflecting off bright-green walls. Hanging chalkboards advertise store specials and grooming services. Products sit on shelves, a mix of purple and corrugated metal. Exposed ducts and concrete floors — the latter on which shop dogs Sancho and Mimi lounge — complete the look.

“We wanted to convey a fun, friendly atmosphere with the design,” says Whitney Kamish, 26, co-owner of the store with her sister, Jessica Ellis, 31.

They did exactly that, and the dominant hue of The Green Spot also perfectly represents its primary goal: to be the place in Omaha for natural and organic pet foods as well as eco-friendly care products, toys and accessories.

The store opened in 2012 with Ellis and her original partner, Jennifer Haines, at the helm. The sisters had met Haines through the rescue organization Ellis co-founded in 2008, Pug Partners of Nebraska.

“Working to rehab and rehome pugs with medical issues led us to learn more about pet nutrition and to discover the need for a store like this in the area,” Kamish says.

Still a graphic design major at nearby Bellevue University, she did not join her older sister and Haines as they put in applications for a small-business loan, nine of which were rejected before Centris Federal Credit Union took a $140,000 chance on the young entrepreneurs. Ellis and Haines also put up $17,000 each in savings. Kamish took over Haines’ stake in 2015, promoting herself from employee to co-owner.

Another big change for The Green Spot happened in 2014, when adjacent retail space became available — the store grew in square footage from 1,300 to 3,300.

“The expansion has allowed us to offer a wider variety of products and more services,” Kamish says. “We doubled our full-service grooming area and also now have two self-service dog washes. We now have two groomers on staff, each with 35-plus years of experience. Our customers feel confident trusting us with their furry family members.”

Spot Lounge was another addition. The enclosed area within the store has comfy couches—which of course the pups are allowed on — and offers free Wi-Fi and coffee (via a Keurig to avoid having to involve the health department).

“Customers can come in and relax and socialize with their dogs,” says Kamish, adding that the lounge also serves as a meeting and event space for local rescues. Groups can gather there to talk shop and to introduce their adoptable animals to potential forever families.

Devoted rescuers themselves, the sisters point to The Green Spot’s relationships with local animal-welfare organizations as a key to its success.

“When we were first starting out, we made a big push to reach customers through rescues” and to give back, Kamish says. “We continue to hold events and make donations because we know how quickly vet bills can add up, and every little bit helps.”

One such fundraiser is Trimming Paws for a Cause, with proceeds from $10 nail trims during the event going to a different rescue each time. The ongoing goodwill has contributed to steady business growth as well as community support. The U.S. Small Business Administration named the store Small Business of the Year for the 2nd Congressional District in 2014. Loyal customers have helped it win “Best Of” pet supply and grooming awards from Omaha Magazine and alt-weekly The Reader for several years running.

“They’re why we’re here in the first place,” Kamish says of the store’s regulars. “We enjoy working with them on a common goal: the health of their pets.”

To that end, The Green Spot has nutrition experts on staff who guide customers toward the best possible foods and supplements for their dog or cat based on age, health issues and budget. The store’s website also includes helpful information on the topic, from tips for decoding food labels to advice on changing diets.

Kamish and Ellis are proud of their position in Omaha’s pet community, both as supporters of rescue and advisers on pet nutrition. They value equally, though, their role as employers.

“It’s a really good way to look at success,” Kamish says. “We can focus on profit percentages, but creating jobs is also important. The store started with two, and now, including ourselves, we have 18 people on staff.”

Make that 20, when you add in Sancho and Mimi. 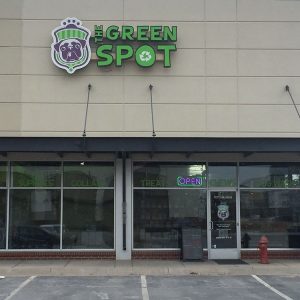 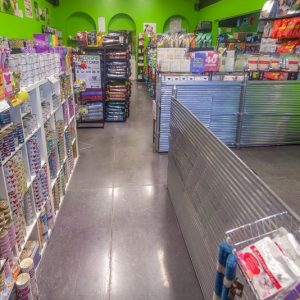 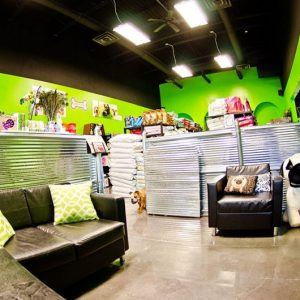 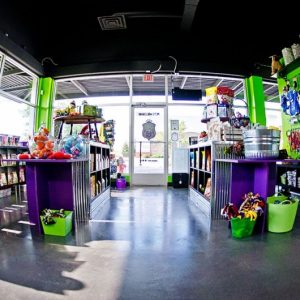 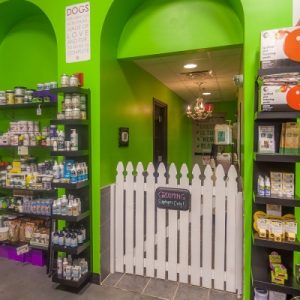 1. CUSTOMER’S BEST FRIEND: In addition to honoring frequent buyer programs from the brands it sells, the store also offers Bonus Bones. Customers get one point for every $1 they spend. At 100 points, they get $5 off their next purchase. Best of all: The store tracks point accumulation for customers.

2. FULL-SERVICE OR DIY GROOMING: Some dogs require a full groom because of their breed, and others simply need a bath. The Green Spot welcomes both. DIYers especially appreciate the high-waisted tubs and not having to clean up after. Service, police, foster and recently adopted dogs get special deals on DIY washes.

3. DELIVERY FOR DOGS & CATS: The store allows customers to shop locally online or by phone. Customers can have products brought to their office or home, with many opting to provide a key so items can be placed inside — even in their freezer in the case of frozen raw foods.

4. GIVING BACK: To help like-minded organizations with their fundraising efforts and events, The Green Spot donates items for auction as well as cash or trade sponsorships for prizes.

5. SHOP DOGS: Sancho the perro de Presa Canario and Mimi the pug often greet visitors to the store. Sancho calls both owners mom, and Mimi lives full-time with Ellis. “Mimi is Jessica’s recent puppy mill rescue,” says Kamish. “She weighs 10 pounds, versus Sancho’s 130, and she totally bosses him around.”

Lifetime Cost of a Pet Can Reach $55K, Study Finds