Arat Montoya provides all of the above through Doggie School Bus in West Linn, OR. What began as a simple way to increase his daycare bookings has become a marketing success story.

In 2016, Montoya was newly married with a baby on the way. His client base consisted of 10 pups he would take to a friend’s 5-acre property on various days. Revenue needed to grow.

Montoya drove a 2008 Scion at the time, and its gold color resembled that of a school bus. Why not add black lettering identifying it as such — for dogs — plus a strategically placed stop sign and contact info? He did exactly that.

“Then I parked my car in the driveway, facing the street,” Montoya says. Within a week, he had 16 new clients.

Doggie School Bus and his son were both born that year.

Montoya picks up pups within a 5-mile radius of his home, starting at 6 a.m., Monday-Friday. He takes them to the property, which now has a fully fenced half-acre officially leased by his company, where they can run free during play sessions and rest during naptime. Daycare costs $35 and includes transportation, with the bus leaving at 4 p.m. to start drop-offs. All dogs must pass a temperament test to join the pack.

Montoya has upgraded his “school bus” twice as the business has grown. A cargo van replaced the Scion that first year, and in 2017 he found the perfect vehicle for transporting dogs: a shuttle.

“School buses actually make a lot of noise because they’re made for city driving. Shuttles use freeways, so they have more insulation,” Montoya says, explaining his choice. “The dogs don’t stress out from noise because it’s quiet inside the cabin.”

The vehicle also came with a wheelchair lift, which he wanted for his senior charges.

Montoya paid $7,000 and put in an additional $2,000 plus his DIY efforts. He pulled out most of the seats and installed rubber flooring, tinted the windows and applied new decals that were printed locally.

Despite not being yellow like the first model, it excels as a mobile billboard for Doggie School Bus.

The Facebook page for his business also has taken off, with nearly 27,000 followers thanks to a video one of his clients took of her pup running and leaping onto the bus — it went viral. 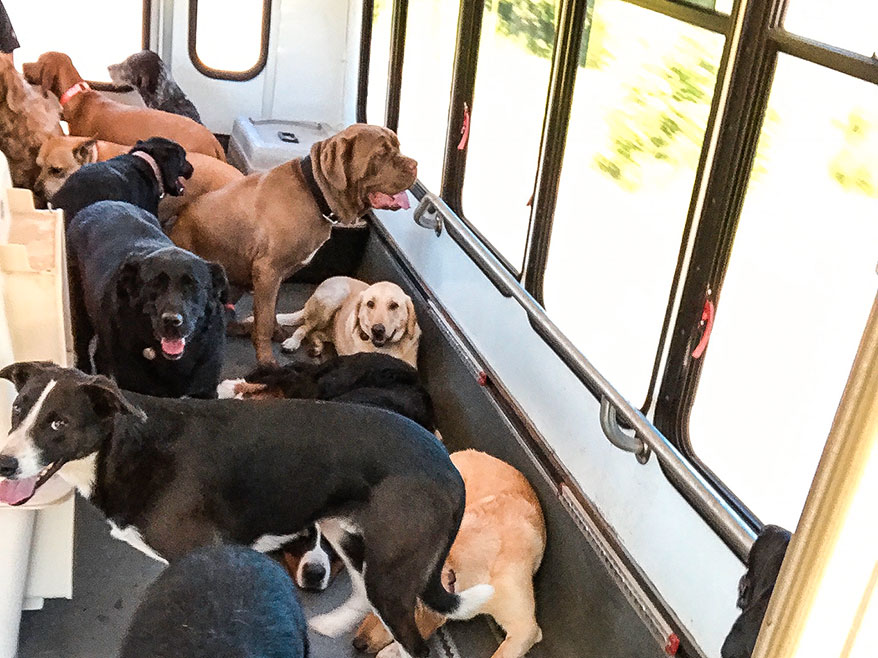 Do It Yourself: Five Steps to Thank You Rewards and Referrals

Related Topics:Best of the Bestpet businesses in OregonPets+ May'18
click to Comment(Comment)

New Edibles for Cats, Vegan Bars for Dogs and Toys for the Holidays [GALLERY]

4 Tips for Negotiating the Best Lease for Your Pet Business

Video: Don’t Be Afraid to Run Multiple Pet-Business Marketing Promotions at Once