The top five states where the most pets need to be saved are California, Texas, North Carolina, Florida and Louisiana, who together make up more than 50% of the nation’s shelter killing of dogs and cats. While the top five states with the smallest number of pets being killed are Vermont, Rhode Island, North Dakota, New Hampshire and Delaware, which has once again reached no-kill status in the state (a state is considered to be no-kill when every brick-and-mortar shelter serving and/or located within the state has a save rate of 90% or higher).

More highlights from the findings are listed below. 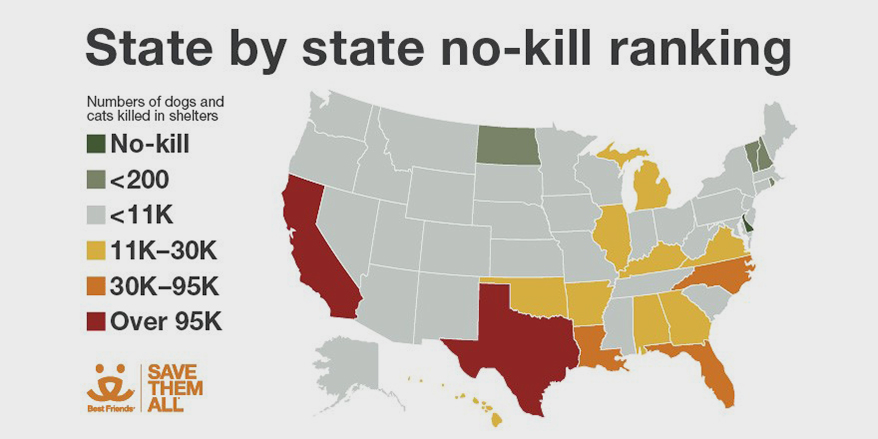 Over the past three years, Best Friends has spearheaded a first-of-its-kind extensive data collection process that involved coordinated outreach to every shelter in America followed by additional research, data analysis, and technology development. To create the most comprehensive data set on animal welfare ever published, Best Friends collected data directly from shelters, state and local coalitions, government websites, and even FOIA requests. The Best Friends 2020 dataset (consisting of statistics collected during 2019) of U.S. shelters has a total net intake of 5,360,060 animals representing 4,850 known shelters. Of this intake total, 92% of the data is based on collected information from 3,608 brick and mortar shelters. The remaining 8% is estimated to cover the uncollected shelters and their respective counties.

“We are seeing continued momentum and progress towards the goal of ending the killing of dogs and cats in U.S. shelters by the year 2025, with the overall number of pets being killed in the U.S. continuing to go down and the number of shelters that are no-kill going up,” said Julie Castle, chief executive officer, Best Friends Animal Society.

Castle continued, “For the past several years, Best Friends and progressive shelters nationwide have been changing the way they do business and the way they relate to their communities: simplifying adoption policies and requirements; building out community pet fostering programs; implementing trap, neuter, return (TNR) programs for community cats; passing more pet-friendly legislation to combat the retail sale of puppy mill dogs and breed discrimination; advocating for more pet-inclusive housing, and removing barriers for the public to help pets with the use of technology. And it is making a difference.”

Notable highlights from the findings include:

“Best Friends has always believed that anyone can help homeless pets. You don’t need a rescue label, special credentials or permission to help save animals. Individual community members are the no-kill movement’s greatest resource. Putting this data directly into the hands of the public allows individual community members and advocates like the members of our 2025 Action Team to gain a better understanding of exactly which shelters and types of pets are most in need of help and helps to connect them to those shelters,” Castle added.