(PRESS RELEASE) Nulo, one of the fastest-growing super-premium pet foods, announced that its CEO and founder, Michael Landa, has won the Ernst & Young Entrepreneur of The Year 2019 Award in Central Texas for the consumer products and retail category. This is Landa’s second nomination and first win.

Now in its 33rd year, the awards program has expanded to recognize business leaders in more than 145 cities and more than 60 countries, and is considered one of the most prestigious business awards programs in the U.S. It recognizes entrepreneurs and leaders of high-growth companies who are excelling in areas such as innovation, financial performance and personal commitment to their businesses and communities.

Podcast: Learn the Most Powerful Hidden Features of Google My Business

Landa was announced the winner in Central Texas after selection by a panel of independent judges at an event on June 27 in Austin, TX.

“I founded Nulo nine years ago on the principle that nutrition is just as important to a dog’s or cat’s well-being as the love we show them as pet parents,” Landa said. “Our rapid growth since then shows that millions of other pet owners around the country share in that belief. The stories I hear about how Nulo has changed pets’ lives are the driving force behind why we do what we do. I’m honored that Ernst & Young chose to recognize our commitment to nutritional excellence, innovation and, ultimately, our pets.”

Landa has been involved in the pet industry in several capacities for nearly 20 years. He launched a pet-sitting and dog-walking company in 2001 in Los Angeles, which grew to become the one of the nation’s largest pet services businesses. Years later, Landa began to notice that an increasing number of dogs and cats under his company’s care required insulin shots to manage their diabetes. His observation — which has since been validated through commissioned food studies and industry research — eventually led to Nulo’s founding. The company’s ongoing commitment to super-premium food recipes for dogs and cats has led to rapid year-over-year growth and drawn the attention of dozens of Olympians, elite athletes, celebrities and global events such as Spartan, the world’s largest obstacle race and endurance brand.

Founded and produced by Ernst & Young LLP, the Entrepreneur of The Year Awards are nationally sponsored by SAP America and the Ewing Marion Kauffman Foundation.

Raw Food Is the Focus for 2 PETS+ Wellness Summit Panels

(PRESS RELEASE)With the new year comes new goals and adventures. So, while you’re working on your personal goals, don’t forget about your four-legged family members. January is National Train Your Dog Month and an excellent opportunity to make a resolution to learn something new with your dog.

Vital Essentials is hosting its first ever “Train Your Dog” Contest on Instagram to help promote the importance of socialization and training for happier, healthier dogs. The contest runs Jan. 13-27. Two winners will be selected from photos posted on Instagram with #TricksforVETreats.

Pet parents can enter our “Train Your Dog” Contest in three easy steps:

All entries will be featured in Vital Essentials Instagram highlights. Winners will be selected on Jan. 31 and will receive a prize pack that includes five Vital Essentials Freeze-Dried Family Size Treats, an $80 value. These newest additions to the Vital Essentials lineup are great for multi-dog families or for sharing on your pup’s play dates.

“Our high value treats are ideally suited for training puppies, teaching new tricks or reinforcing positive behaviors,” commented Melissa Olson, VP marketing and sales. “Because our treats are made from single protein and freeze-dried, their nutritional value is much higher than other treats that are highly processed. Dogs eagerly follow commands to get their Vital Essentials reward!”

National Train Your Dog Month was established in 2010 and is designed to promote the importance and benefits of training dogs. Too many dogs are turned into animal shelters each year for behavior and training issues that could be easily solved with proper socialization and positive training. Most importantly, training your dog is not just beneficial, it’s FUN!

For more information and to see some great pet tricks, follow Vital Essentials on Instagram. Contest rules available at vitalessentialsraw.com/sweepstakes

(PRESS RELEASE) Oxyfresh will be exhibiting and showcasing its full line of premium pet dental health and grooming products at Global Pet Expo. The Oxyfresh booth 5970 will be launching its new point-of-purchase display featuring products from its dental line, as well as its new non-toxic Cage Cleaner.

Oxyfresh does not use harsh chemicals or additives that can be harmful to pets. Its groundbreaking, proprietary ingredient Oxygene is what sets the company’s products apart. It is unique because it gently and safely neutralizes the bacteria that causes pet bad breath and periodontal disease, helping pets live longer, happier lives.

The Oxyfresh booth will showcase some of its most popular and beneficial innovations. These include: Pet Dental Water Additive, Pet Ear Cleaner, Pet Shampoo, Pet Dental Gel Toothpaste, Pet Dental Breath Spray and Pet Deodorizer, to name a few. The recently launched Pet Dental Kit will also be displayed, which includes everything needed to help pets achieve a healthy mouth and fresh breath.

“Our Pet Dental line has had tremendous success over the years, which is why we are very excited to offer our new point-of-purchase display highlighting some of our most popular dental products at Global Pet Expo,” says Mariano Tellarini, president of Oxyfresh. “This new eye-catching, high-resolution POP display will help us to continue establishing brand awareness, increase revenue, and promote our innovative pet dental care creations.”

In addition, Oxyfresh is excited to officially launch its new Cage Cleaner at this year’s show. The Cage Cleaner is ideal for cleaning kennels and cages for small animals (birds, gerbils, mice, etc.) Like all products at Oxyfresh, Cage Cleaner is made in the USA, cruelty-free, non-toxic, safe, gentle, effective and won’t disrupt immune system.

The first two brands to be intoduced are Croci Spa from Italy and RelaxoPet from Germany.

“We will be supplying “Europe’s best kept secrets” to American pet retailers across the country,” says Daniel Stopnicki, owner and founder of Europet, which is a subsidiary of My Family Canada.

Video: Dog Gets Stuck in Tree, Has to Be Rescued by 911 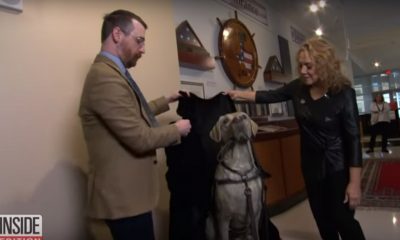 Stopnicki has been in the pet industry for nearly 40 years, specializing in market development for high quality European brands. Having been dedicated to the aquatics segment from the 1990s into the 2000s, he made the switch in 2016 when he introduced the revolutionary My Family Engraving system brand to both the USA and Canadian market place. As the owner of My Family Canada, he is the exclusive Canadian distribution partner for My Family.

Having solidified the My Family distribution network in the U.S., Stopnicki has transitioned out of the market development role with My Family USA. He is now able to focus on bringing his passion for high-end products and unique pet industry marketing expertise by providing access to the lucrative U.S. pet supply industry to a select number of European brands.

The first two brands that Europet will introduce are Croci Spa from Italy and RelaxoPet from Germany.

Europet is the exclusive U.S. distribution partner for Croci Spa, Pet Products from Italy. Croci was founded in Varese in the 1990 thanks to the entrepreneurial intuition of the Croci brothers. The company later gained success in Italy and abroad developing its own high-quality branded products.

Europet is also the exclusive U.S. distribution partner for RelaxoPet, a compact sound module that provides high-frequency vibrations for deep relaxation in dogs, cats, birds and even horses. Invented by Frank Bendix, the RelaxoPet pro Animal relaxation trainer can be used to relieve anxiety-related stress situations in most pets by influencingstress reaction in a subtle and hardly noticeable way — even preventively.

Europet will be exhibiting at the upcoming Global Pet Expo where it will have officially launch its new products.

True Leaders Learn the Skills of Telling, Selling and Asking

This error message is only visible to WordPress admins

Error: API requests are being delayed for this account. New posts will not be retrieved.

Make sure this account has posts available on instagram.com.