Blogger Bryn Nowell’s most treasured ink is a mandala tattoo of her Boston Terrier, Yoda. Says Bryn: “He’s not this regal looking in real life, but he is an A+ snuggler,” says Bryn, who runs the website adogwalksintoabar.com.

More animal art adorning Bryn Nowell’s body. Says Bryn: “Bean is my first pup and my spirit animal. I didn’t know what my life was missing until she joined us and I am so glad we’ve had 10 years together.”

Maya sits on the inside of the left arm of Robin Arouty, of Robyn Arouty Photography in Houston, TX, across from a camera inked in a similar style. Together they represent the journey toward a true calling. Arouty adopted the Chinese crested-Jack Russell terrier mix as a puppy in 1996. She now makes her living as a photographer, specializing in pets and their people. Inspired by 16-plus years with Maya, Arouty got the tattoo that imagined her as a Japanese kokeshi doll, and created Pocketshots, 30-minute sessions with partial proceeds going to animal rescues.

Pet sitters Michelle and Steven Meyer of Fur Stars Pet Care in Columbus, WI have a pack of their own, and Alli the rottweiler-German shepherd mix reigned over it until she passed last year. “I got the tattoo of her as a queen because she was much more than just a princess,” says Meyer of the design on her calf, complete with crown and scepter.

Flying M Feed Co. store cat Chaz earned a spot on owner Trace Menchaca’s arm. “I wanted a crazy cat tattoo and came up with this idea,” she says. “It’s one of my favorites!”

On her other arm, Trace Menchaca of Flying M Feed Co has had a coquette-ish heifer inked.

Nancy and Chris Guinn, the couple behind Dog Krazy with multiple outlets in Virginia, have stopped counting their tattoos. “I’m covered in paw prints,” Nancy Guinn says. But each have their favorites, and they represent heart dogs or other special pets.

Nancy Guinn paid tribute to Triana the Beagle on her ankle. “I lost her when she was 20,” says Nancy. “She started me on my path to saving all the dogs.”

The most recent addition to Nancy Guinn’s tattoo collection is this one on the back of her shoulder, which features her business logo and honors what she calls “the dog that changed my life”.

For Chris Guinn, a bullmastiff rescue named Nova takes up the most space on his skin. “When she passed away two years, my husband was crushed. I surprised him with the tattoo as a wedding anniversary gift,” Nancy says. “She was the only girl he loved more than he loves me, and I completely understand.”

Pet business consultant Michelle Maskaly of Platinum Horse Media in Lake George, NY, paid tribute to her beloved dog Toby during his treatment for lymphoma. “From the moment I took him home, he changed my life, from where I worked, who my friends were and the life path I would follow,” she says. “A week after Toby permanently became a part of my body, he passed away naturally after his 17-month battle with cancer.” Instead of using a generic paw print, Maskaly used his actual paw as inspiration for the tattoo on her arm. “It even includes all the little hairs between Toby’s pads.”

A close-up view of Michelle Maskaly’s tattoo of Toby’s paw.

Wendy the dachshund has her human’s back, literally. “When I wear a swimsuit, Wendy’s head peeks over,” says Christine McAlister of Countryline K9 Grooming in Tupelo, MS, of the paisley-print tattoo. “I get lots of compliments on her.”

Charlotte Hayward of Frick And Frack Pet Resort in Lindsay, Ontario, Canada, inked her pug and kitty on her skin.

All you have to do is look at his skin to know the biggest loves of Paul Lewis of Birds Unlimited in Webster, NY. Snapping turtles, for starters.

“My first pets were little red-eared sliders my mom got me from the Woolworths pet department,” he says. “They’ve been in and out of my life ever since.”

The rest in his tattoo collection feature birds, his biggest passion and life’s work as owner and operator of Birds Unlimited for 26 years.

One of the favorite tattoos of Paul Lewis is the simple feather design on his arm. “It represents life,” he says. “Something so simple yet extraordinary, as without them birds couldn’t fly, stay warm, protect their bodies or find mates.”

Another of Paul Lewis’s tattoos features a bird’s talons.

Unlike all others in this roundup, Bobbette Daugherty does not own a pet business. Instead, her appreciation of one earned her a spot.

“Camp Dogwood is my favorite place on earth, and I wanted the tattoo so I could have a little piece of it with me every day,” she says.

Daugherty has been sending her dogs to camp since 2005. She inked its logo on her ankle last year and shared it on Facebook with owners Alysa Slay and Dave Eisendrath, who were thrilled to have such a permanent endorsement of their business. 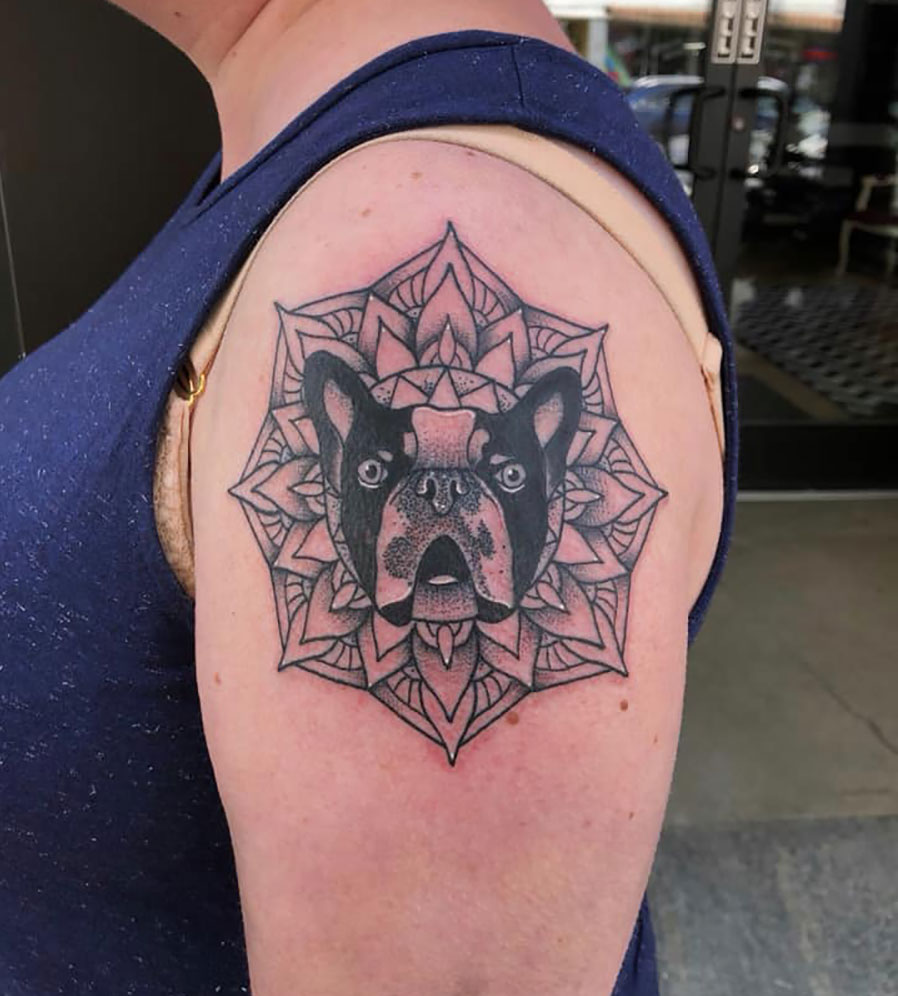 Previous 10 Proven Training Methods to Supercharge Your Staff and Yourself

Blogger Bryn Nowell’s most treasured ink is a mandala tattoo of her Boston Terrier, Yoda. Says Bryn: “He’s not this regal looking in real life, but he is an A+ snuggler,” says Bryn, who runs the website adogwalksintoabar.com.