(Press Release) NEW YORK – Doc & Phoebe’s Cat Co., formally the NoBowl Feeding System, has undergone a rebranding and is excited to share its new name, logo and website with cat owners. The Doc & Phoebe’s Feeder is a feeding solution to get cats hunting and having fun with their food. Hunting five small meals a day in Doc & Phoebe’s mice helps cats lose weight, exercise and use their natural hunting behaviors as a form of mental exercise. It’s as simple and fun as a game of cat and mouse! Learn more at: https://docandphoebe.com/. 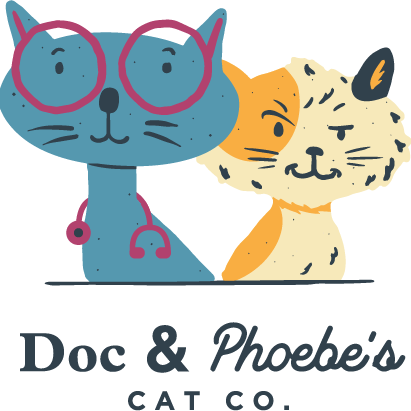 Since launching the NoBowl Feeding System in early 2016, the company has had much success demonstrating the many benefits of their feeder to the veterinarian community around the world. Not only is this unique indoor hunting system 100 percent cat-approved, but it is 100 percent veterinarian-researched and recommended as well.

“Our company is devoted to bringing cat families innovative solutions that benefits the wellbeing of our precious felines. Under the new name Doc & Phoebe’s, the brand and packaging will aim to target consumers and cat owners,” said veterinarian Dr. Liz Bales, CEO of Doc and Phoebe’s. “We are very excited to share the future of cat care and our rebrand with all pet parents in order to make cats happier and healthier than ever!”
Let’s face it, modern life with cats has its downsides. Unfortunately, many pet owners have experienced these behaviors from their cats:

Although these are common cat problems, they are actually not normal, and they don’t have to be an accepted part of cat ownership. Doc and Phoebe’s Cat Co. has listened to science, nature and especially to cats. What the company has discovered is that the bowl is the wrong way to feed a cat. Bowl feeding leads to laziness, frustration and overfeeding.

Thanks to the Doc and Phoebe’s Indoor Hunting Feeder, soon, feeding cats from bowls will be a thing of the past. In two minutes a day, a cat owner can fill the five mouse-shaped feeders and hide them around the home. Now the cat gets to hunt, catch and play with five small meals a day, just like it would in nature. It makes sense, right? Cats hunt mice and it makes them happy and healthy.

Bales and partner Phebe Kearney designed the prototype together and launched under the name The NoBowl Feeding System with a Kickstarter campaign in early 2016. Their goal was to raise $36,000 in 30 days, but they surpassed this goal in just four days and went on to raise nearly $250,000 in crowdfunding. This groundbreaking invention took off and won several awards since launching, like the SuperZoo’s Best New Cat Product award. They have also been featured in The New York Times, The Daily Mail, Business Insider and Veterinary Practice News.

Today more 13,000 cats in over 35 countries have ditched the bowl and are using Doc and Phoebe’s Cat Feeder to hunt for their food. In fact, in an awards ceremony in London that took place recently, the International Veterinary Organization, iCat Care, awarded Doc & Phoebe with the prestigious Cat Friendly Award.